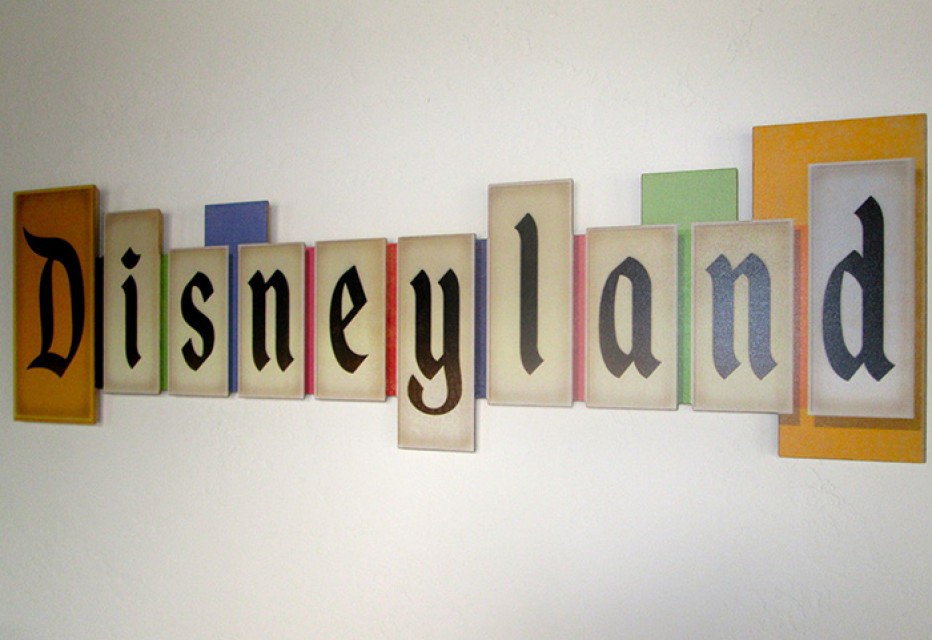 As shown on the official Disney blog, this wood Disneyland marquee is actually part of a bigger sign collection created by the arts and collectibles team at Disney. But I’m not here to discuss how cool these signs are — my mission is greater.

Because I’m a stickler for authenticity and these signs are supposed to represent their original counterparts, I noticed a couple of things that didn’t really add up. To start, I’ll give you two frames of reference for how the Disneyland marquee originally looked: 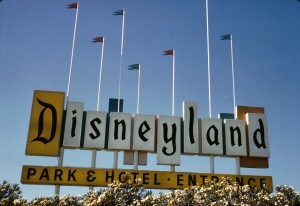 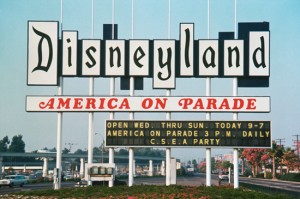 Problem #1 — The biggest problem is the letter Y on the reverse side. As you can see in both images, the little colored blocks that appear behind the letters are actually the faces of the letters on the other side of this double-sided marquee. On the wooden art piece in question, they got three of the four correct. Somehow they left out the one for the letter Y! This bugged me, so I made up an example in PhotoShop® to see what this piece would look like if done correctly:

As you can see, it still looks great so I hope the artist didn’t leave it out for aesthetic reasons. It may have very well been just an oversight, but in my opinion, this is quite a big one! Here’s the original as it looks when you buy one:

Problem #2 — The second thing I noticed that was incorrect about this is the font of the Disneyland logo. Today’s font is more refined and honestly does look better than past logos, but in keeping with originality, it would have been nice to see the original font be used on this piece.

The fonts differ ever-so-slightly, but you can see the biggest differences with the first letter D, the S and the Y. The original font, being wider, is also responsible for offsetting the squares surrounding each letter which would have altered the letter spacing on the replica sign as well.

Normally, I wouldn’t make a big deal about such issues, but with the price tag on these signs being $150, it’s only fair to get an accurate representation of the originals. With all that said, I still LOVE this sign!

If the wooden sign program continues to grow, I’d be happy to see the 1989 marquee be added to the collection as well. I’d also love to see the aforementioned issues fixed on new releases of this marquee if there is to be new stock created. So if someone at Disney happens to read this, please forward it on to anyone responsible for managing these products!

Before I go, here’s a photo purely for your enjoyment. For a short period of time in 1989, the original marquee still stood proudly on Harbor Blvd. while the new one was being built! 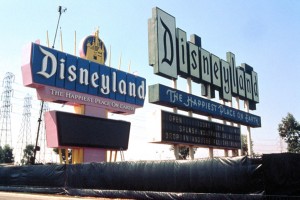