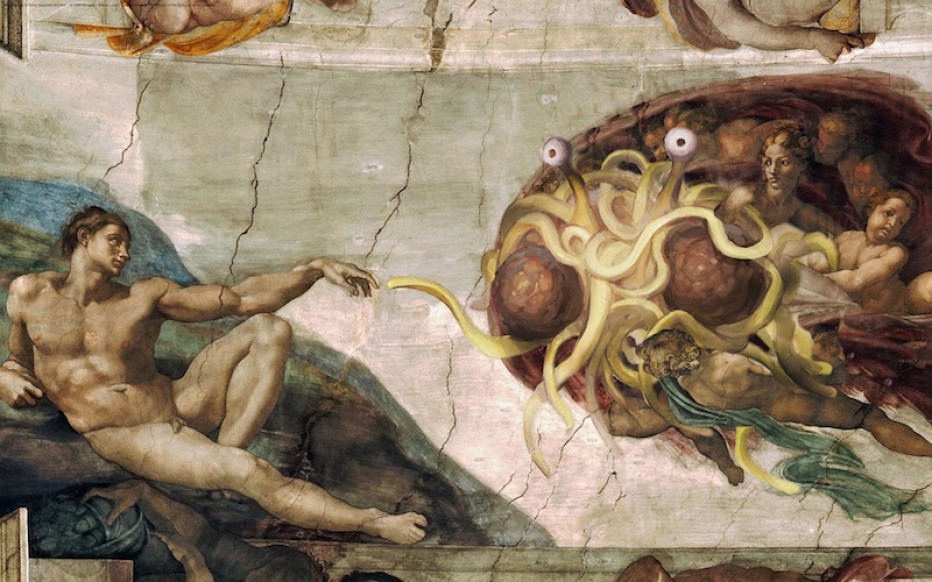 Wow…I can’t believe I just titled this post with that! I didn’t make this up folks. It seems that a man by the name of Niko Alm who hails from Austria has finally won his battle with Austria’s equivalent of the DMV to take his drivers license photo with a pasta strainer on his head. If you don’t believe me, here’s the proof: 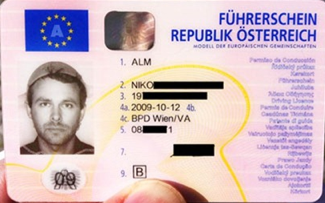 Apparently, Mr. Alm is a member of the The Church of the Flying Spaghetti Monster (Church of the FSM), a religious group that believes the universe was created by a flying spaghetti monster. Whether you’re laughing right now or you just think this guy is crazy, one thing is for sure; it really points out the absurdities of organized religion. I’m not here to spew my beliefs or offend anyone else’s, but I have to say that this guy’s point is well-taken. It’s a satirical take on how organized religions operate and define their existence by mystical gods and other higher beings.

Like any other church in the world, the Church of the FSM believes that the earth and the universe was created by a higher power; in this case, a spaghetti monster — not just any spaghetti monster, but a flying one. Their followers are known as Pastafarians. Their website offers this detailed description of what they represent:


“Pastafarianism is a real religion.

Most of us do not believe a religion – Christianity, Islam, Pastafarianiasm – requires literal belief in order to provide spiritual enlightenment. That is, we can be part of a community without becoming indoctrinated. There are many levels of belief.

By design, the only dogma allowed in the Church of the Flying Spaghetti Monster is the rejection of dogma. That is, there are no strict rules and regulations, there are no rote rituals and prayers and other nonsense. Every member has a say in what this church is and what it becomes.

To outsiders it makes us hard to define, but here are some general things that can be said about our beliefs:

We believe pirates, the original Pastafarians, were peaceful explorers and it was due to Christian misinformation that they have an image of outcast criminals today
We are fond of beer
Every Friday is a Religious Holiday
We do not take ourselves too seriously
We embrace contradictions (though in that we are hardly unique)”

Whether or not this church is the real McCoy is not the point. The fact is that it does exist. For those seeking hope and direction in life, but have not found it within the more modest religions available might find comfort here. Those who don’t believe in higher powers can relish in the satire. Others can simply watch in horror or pleasure.

I’m not a fan of organized religions. I don’t believe that the way we live our lives should be dictated by a scripture written thousands of years ago. If you have religion for direction in life and it helps, then more power to you. If it consumes your life and you might be borderline insane, then I hope your god can help you. Either way, as long as you’re not hurting me or the people around you, you’re ok in my book!

What I love about the Church of the FSM is how it goes to prove that anyone, anywhere can follow a belief system and find themselves content in life. While a flying spaghetti monster might sound a little un-believable to you, I bet the followers of this church and those who don’t have a church find it un-believable that a man built an wooden boat and saved two of every animal on the planet from a 40-day flood.

The Church of the Flying Spaghetti Monster was last modified: August 21st, 2015 by Brandon
Tags: church, religion
Share this post

Are there rocks in chewing gum?

Let me preface this post by saying that the title isn't entirely accurate and it's possible (depending on how you look at it) that it's not at all accurate. Nonetheless, I've been battling this issue with a co-worker for some time now. Here's the back story. A long time ago, I watched a...